"We Are Robin Hood!"

Stayed in the Holy Land

Djaq is a Saracen who meets the gang when being transported as a slave and is rescued by them. Her true name is Saffia, but she disguises herself as a boy by adopting her dead twin brother's name and appearance. Though Robin's outlaws are shocked when Will reveals that she is a woman, they permit her to stay, and she becomes a valuable and well-liked member of the band. She frequently proves herself logical and knowledgeable, often silencing arguments between other members of the band, and is very observant, noticing important details the others miss.

Djaq's father was a physician, and she herself has considerable knowledge of medicine and chemistry, which she uses to serve as the group's medic (notably saving Marian near the end of the first season when she goes into cardiac arrest) and to create the devastating "black powder". She expresses fondness for the entire gang of outlaws, even Allan following his defection. In "A Good Day to Die" she and Will express their mutual love for each other. Following her reunion with her people at the end of the second season, she and Will remain together in the Holy Land.

Djaq was shown to be a highly skilled swordswoman, showing extreme tenacity and incredible reflexes. She was more than capable in battle and showed outstanding swordsmanship and archery skills.

She was also highly intelligent and had extremely cunning tendencies. She recognized the Sheriff's indestructible armor and also the black powder explosives. She was deeply passionate in alchemy and knew first-aid. 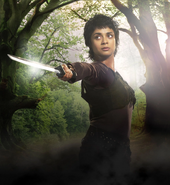